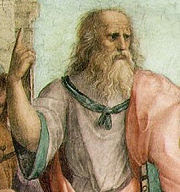 "(The) Apology (of Socrates) is Plato's version of the speech given by Socrates as he defends himself against the charges of being a man "who corrupted the young, did not believe in the gods, and created new deities". "Apology" here has its earlier meaning (now usually expressed by the word "apologia") of speaking in defense of a cause or of one's beliefs or actions (from the Greek απολογία)."
Publicada por Mira em 2:58 PM