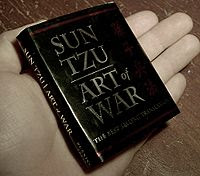 The Art of War (Chinese: 孫子兵法; pinyin: Sūn Zǐ Bīng Fǎ) is a Chinese military treatise written during the 6th century BC by Sun Tzu. Composed of 13 chapters, each of which is devoted to one aspect of warfare, it has long been praised as the definitive work on military strategies and tactics of its time.

The Art of War is one of the oldest books on military strategy in the world. It is the first and one of the most successful works on strategy and has had a huge influence on Eastern and Western military thinking, business tactics, and beyond. Sun Tzu was the first to recognize the importance of positioning in strategy and that position is affected both by objective conditions in the physical environment and the subjective opinions of competitive actors in that environment. He taught that strategy was not planning in the sense of working through a to-do list, but rather that it requires quickly responding appropriately to changing conditions. Planning works in a controlled but competitive environment, and competing plans collide, creating situations that no one planned for.

The book was first translated into a European language in 1782 by French Jesuit Jean Joseph Marie Amiot, and had possibly influenced Napoleon, and even the planning of Operation Desert Storm. Leaders as diverse as Mao Zedong, General Vo Nguyen Giap, and General Douglas MacArthur have claimed to have drawn inspiration from the work.

The Art of War has also been applied to business and managerial strategies.

The Art of War is divided into 13 chapters (or P'ien), and the collection is referred to as being one Ch'üan ("whole" or alternatively "chronicle"). As different translations have used differing titles for each chapter, a selection appears below. Lionel Giles 1910 translation is considered the standard reference.

Chapter Summary
Laying Plans explores the five key elements that define competitive position (mission, climate, ground, leadership, and methods) and how to evaluate your competitive strengths against your competition.
Waging War explains the economic nature of competition and how success requires making winning pay, which in turn, requires limiting the cost of competition and conflict.
Attack by Stratagem defines the source of strength as unity, not size, and the five ingredients that you need to succeed in any competitive situation.
Tactical Dispositions explains the importance of defending existing positions until you can advance them and how you must recognize opportunities, not try to create them. 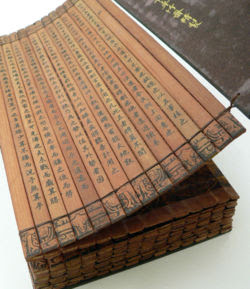 Energy expels the use of creativity and timing to build your competitive momentum.
Weak Points & Strong explains how your opportunities come from the openings in the environment caused by the relative weakness of your competitors in a given area.
Maneuvering explains the dangers of direct conflict and how to win those confrontations when they are forced upon you.
Variation in Tactics focuses on the need for flexibility in your responses. It explains how to respond to shifting circumstances successfully.
The Army on the March describes the different situations in which you find yourselves as you move into new competitive arenas and how to respond to them. Much of it focuses on evaluating the intentions of others.
Terrain looks the three general areas of resistance (distance, dangers, and barriers) and the a six types of ground positions that arise from them. Each of these six field positions offers certain advantages and disadvantages.
The Nine Situations describes nine common situations (or stages) in a competitive campaign, from scattering to deadly, and the specific focus you need to successfully navigate each of them.
The Attack by Fire explains the use of weapons generally and the use of the environment as a weapon specifically. It examines the five targets for attack, the five types of environmental attack, and the appropriate responses to such attack.
The Use of Spies focuses on the importance of developing good information sources, specifically the five types of sources and how to manage them."
Publicada por Mira em 4:52 PM