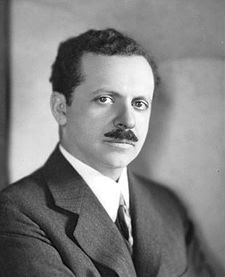 "Edward Louis Bernays (November 22, 1891 – March 9, 1995) is considered one of the fathers of the field of public relations along with Ivy Lee. Combining the ideas of Gustave Le Bon and Wilfred Trotter on crowd psychology with the psychoanalytical ideas of his uncle, Sigmund Freud, Bernays was one of the first to attempt to manipulate public opinion using the psychology of the subconscious.

He felt this manipulation was necessary in society, which he regarded as irrational and dangerous as a result of the 'herd instinct' that Trotter had described. Adam Curtis's award-winning 2002 documentary for the BBC, The Century of the Self, pinpoints Bernays as the originator of modern public relations.

He was named one of the 100 most influential Americans of the 20th century by Life magazine.[1]


[edit] Life and Influences
Born 1891 in Vienna to Jewish parents, Bernays was nephew to psychoanalyst pioneer Sigmund Freud. His father was Ely Bernays, brother of Freud's wife Martha Bernays. His mother was Freud's sister Anna. [2] In 1892 his family moved to New York City. In 1912 he graduated from Cornell University with a degree in agriculture, but chose journalism as his first career. He married to Doris E. Fleischman in 1922.

As well as being influenced by his uncle Sigmund's ideas of the Unconscious, Bernays applied the ideas of the French writer Gustave LeBon, the originator of Crowd psychology, and of Wilfred Trotter, who promoted similar ideas to the English speaking world in his famous book Instincts of the Herd in Peace and War. Bernays refers to these two names in his writings. Trotter, who was a head and neck surgeon at University College Hospital, London, read Freud's works, and it was he who introduced Wilfred Bion, whom he lived and worked with, to Freud's ideas. When Freud fled Germany for London at the start of World War II, Trotter became his personal Physician, and Wilfred Bion and Ernest Jones became key members of the Freudian Psychoanalysis movement in England, and would go on to develop the field of Group Dynamics, largely associated with the Tavistock Institute where many of Freud's followers worked. Thus ideas of Group Psychology and Psychoanalysis came together in London around World War II


Bernays's public relations efforts helped popularize Freud's theories in the United States. Bernays also pioneered the PR industry's use of psychology and other social sciences to design its public persuasion campaigns. "If we understand the mechanism and motives of the group mind, is it not possible to control and regiment the masses according to our will without their knowing about it? The recent practice of propaganda has proved that it is possible, at least up to a certain point and within certain limits." (Propaganda, 2005 ed., p. 71.) He called this scientific technique of opinion-molding the "engineering of consent."

In 1913, Bernays started his career as Press Agent, counseling to theaters, concerts and the ballet. In 1914, American President Woodrow Wilson ) engaged George Creel and realizing one of his ideas, he founded the "Committee on Public Information." Bernays, Carl Byoir and John Price Jones worked together to influence public opinion towards supporting American participation in World War I.

In 1919, he opened an office as Public Relations Counselor in New York. He held the first Public Relations course at the University of New York in 1923, publishing the first groundbreaking book on public relations entitled Crystallizing Public Opinion that same year."
Publicada por Mira em 2:27 PM