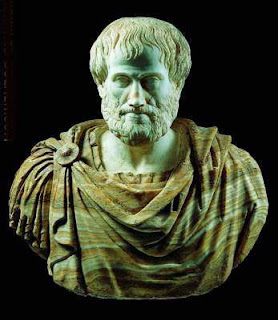 Rhetoric may be defined as the faculty of observing in any given case the available means of persuasion. This is not a function of any other art. Every other art can instruct or persuade about its own particular subject-matter; for instance, medicine about what is healthy and unhealthy, geometry about the properties of magnitudes, arithmetic about numbers, and the same is true of the other arts and sciences. But rhetoric we look upon as the power of observing the means of persuasion on almost any subject presented to us; and that is why we say that, in its technical character, it is not concerned with any special or definite class of subjects.

Of the modes of persuasion some belong strictly to the art of rhetoric and some do not. By the latter I mean such things as are not supplied by the speaker but are there at the outset -- witnesses, evidence given under torture, written contracts, and so on. By the former I mean such as we can ourselves construct by means of the principles of rhetoric. The one kind has merely to be used, the other has to be invented.

Of the modes of persuasion furnished by the spoken word there are three kinds. The first kind depends on the personal character of the speaker; the second on putting the audience into a certain frame of mind; the third on the proof, or apparent proof, provided by the words of the speech itself. Persuasion is achieved by the speaker's personal character when the speech is so spoken as to make us think him credible. We believe good men more fully and more readily than others: this is true generally whatever the question is, and absolutely true where exact certainty is impossible and opinions are divided. This kind of persuasion, like the others, should be achieved by what the speaker says, not by what people think of his character before he begins to speak. It is not true, as some writers assume in their treatises on rhetoric, that the personal goodness revealed by the speaker contributes nothing to his power of persuasion; on the contrary, his character may almost be called the most effective means of persuasion he possesses. Secondly, persuasion may come through the hearers, when the speech stirs their emotions. Our judgements when we are pleased and friendly are not the same as when we are pained and hostile. It is towards producing these effects, as we maintain, that present-day writers on rhetoric direct the whole of their efforts. This subject shall be treated in detail when we come to speak of the emotions. Thirdly, persuasion is effected through the speech itself when we have proved a truth or an apparent truth by means of the persuasive arguments suitable to the case in question.

There are, then, these three means of effecting persuasion. The man who is to be in command of them must, it is clear, be able (1) to reason logically, (2) to understand human character and goodness in their various forms, and (3) to understand the emotions-that is, to name them and describe them, to know their causes and the way in which they are excited.
Publicada por Mira em 2:39 PM